The next Bellator heavyweight tournament starts on October 5th

The Bellator Fighting Championships will be heading back to The Venue at Horseshoe Casino in Hammond, Indiana for Bellator 75 and will feature the quarterfinals of the next heavyweight tournament. 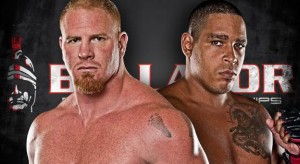 “From the sold out crowd to the incredible fights, our first visit to Horseshoe Casino in Hammond was something I will never forget, so getting back to The Venue was something I wanted to get done immediately,” said Bellator Chairman & CEO Bjorn Rebney. “Our heavyweights always bring a great show with huge power and big KO’s, so our fans in the Chicago area should be in for a great night of fights October 5.”

Tickets for the fight card went on sale today and are available at Horseshoe Casino, Ticketmaster, The Venue-Chicago or by calling 1-800-745-3000.

The fight card will be headlined by the long awaited rematch between Eric Prindle and Thiago Santos. The two heavyweights originally met at Bellator 59, which was the final of the season five heavyweight tournament. The fight was declared a no-contest after Santos landed an illegal groin shot and Prindle was unable to continue.

They were scheduled to have their rematch at Bellator 62 earlier this year, but Santos was unable to make weight and Prindle was declared the season five heavyweight tournament winner. He received a title shot against Cole Konrad and was defeated in the first round by submission.

The other quarterfinal bout that was announced today by Bellator was Brett Rogers taking on Ruslan Magomedov, who will be making his Bellator debut. Rogers recently made his Bellator debut and defeated Kevin Aslpund by doctor stoppage at the end of the second round.

“I love to fight, and after the win against Kevin [Aslpund], it gave me even more motivation to keep training hard and getting in there and do exactly what I know I can do, and give the fans a show,” said Rogers. I want all the fans to know Brett Rogers is back. I’m training the hardest I ever have at ATT in Coconut Creek, and just getting ready to show everyone what I can do.”

Bellator did not announce the other quarterfinal bouts in today’s press release and stay tuned to TheMMAReport.com for updates on this fight card.