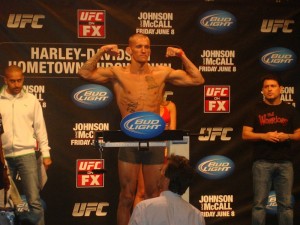 This will be Pague’s third UFC fight since the beginning of June and he has gone 1-1 in his two previous fights.

He defeated Jared Papazian by submission at UFC on FX 3 on June 8th and stepped in on short notice two weeks later at UFC on FX 4. He took the fight against Ken Stone on six days notice and lost by split decision.

Camus enters the UFC on a three fight winning streak and fights out of Roufusport. This will be his fourth fight on 2012 and his last three wins have come by decision. Seven of his eleven career victories are by submission or knockout and four of those have come in the first round. Prior to being signed by the UFC, he was in a bantamweight tournament in the LFC organization and had advanced to the finals.

Pague entered the UFC through “The Ultimate Fighter 14” and showed his grappling skills. Camus will look to strike with Pague instead of getting into a grappling contest with him. Camus will need to keep this fight standing and have his opponent beat him on the feet.