Nick Newell entered the XFC cage on Friday night in Charlotte, North Carolina with seven straight victories to start his career and he continued his winning ways with a knockout victory in the first round. 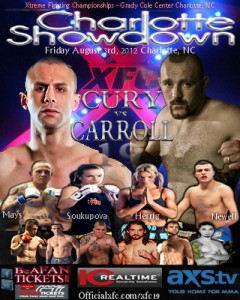 Newell (8-0) now has seven finishes in the first round and this was only his second career knockout victory. He finished David Mays at the 2:01 mark of the first round with a vicious knee.

The main event at XFC 19 was in the welterweight division, Nicolae Cury got a decision victory over Roger Carroll. The fight was primarily on the ground and Cury nearly finished the fight in the third round with a triangle.

In the co-main event, Felice Herrig won her second straight fight and four of her last five with a decision victory over Simona Soukupova. She was able to win a clinching battle in the first round and then used her kickboxing to get the victory.

The XFC is planning to have Newell take on Eric Reynolds for the lightweight title later this year.

The complete results of the main card of XFC 19: Charlotte Showdown is below: