Bellator announced yesterday that Muhammed “King Mo” Lawal would be making his Bellator debut on January 24th and the organization has now announced his opponent. 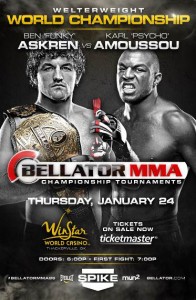 He will be taking on Przemyslaw Mysiala in a quarterfinal bout in the season eight Bellator light heavyweight tournament and the fight will take place on the main card on Spike TV.

Lawal (8-1, 1NC) is the former Strikeforce light heavyweight champion and his only defeat came against Rafael Cavalcante, which he was defeated in the third round by TKO.

He was signed by Bellator MMA earlier this year after he was released from Strikeforce after being suspended by the Nevada State Athletic Commission for testing positive for a banned substance.

This fight will be the first time he has stepped inside a cage since his fight against Lorenz Larkin, which he initially won but was overturned because of the positive drug test.

Mysiala (16-7) will be making his Bellator debut and has won six of his last eight fights. He has never made it to a third round in his career and a majority of his fights have ended in the first round.

Bellator MMA 86 will take place from the WinStar World Casino on January 24th and will be headlined by Ben Askren defending the Bellator welterweight title against Karl Amoussou, who secured this title opportunity by winning the season six welterweight tournament.