Glover Teixeira won his fifth straight fight in the UFC on Wednesday night in Brazil at UFC Fight Night 28 as he defeated Ryan Bader by TKO in the first round and the victory secured him a title shot in the light heavyweight division. 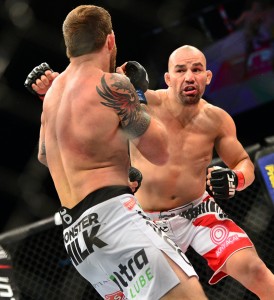 The news of Teixeira being the next title challenger for the title was confirmed during the post fight press conference by UFC executive Marshall Zelaznik.

Teixeira (22-2) has won twenty straight fights since starting his career 2-2. While in the UFC, he holds wins over Kyle Kingsbury, Fabio Maldonado, Quinton Jackson, James Te Huna and Bader.

Four of his five victories in the UFC have come by stoppage with his only decision coming against Jackson at UFC on FOX 6 in January.

He will now wait to see who he will face for the UFC light heavyweight title as current champion Jon Jones will make his next title defense against number one contender Alexander Gustafsson in the main event of UFC 165 on September 21st in Toronto.