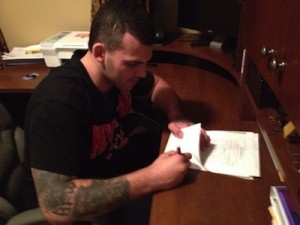 The signing was announced by the World Series of Fighting in a press release on Friday.

“I’ve been very impressed watching Rama’s career develop,” said WSOF Canada Executive Darren Owen. “He gets better every fight and he’s always looking to finish whether he is looking for the knockout or on his feet or a submission on the ground. I know that he wants to fight the best WSOF has to offer and soon he’ll be doing just that. At only 22 years old, he’s got a bright future ahead of him, and I’m looking forward to watching him fight under our banner.”

Rama (8-1) made his World Series of Fighting debut earlier this year and defeated highly touted Olympic wrestler Steve Mocco by unanimous decision. Following his win over Mocco, he took a fight last month against Hague at Unified MMA 19 and won by TKO in the first round.

The win over Hague was his fourth career win to come by TKO/KO and seven of his eight wins have come by stoppage. His only career defeat came last year at Maximum Fighting Championship 36 as he was defeated by current UFC heavyweight Anthony Hamilton.

“I’m very excited to sign with the World Series of Fighting,” Rama said. “They are the biggest promotion in Canada and one of the best in the World. I want to fight for the WSOF Canada title and then the WSOF World title. I want to fight the best guys in the world and I know with WSOF I’ll get the opportunity to show what I’m capable of.”