A featherweight bout between fighters from the season ten tournament is slated for the Bellator 123 preliminary card on September 5th from the Mohegan Sun Arena as Matt Bessette will meet Scott Cleve. 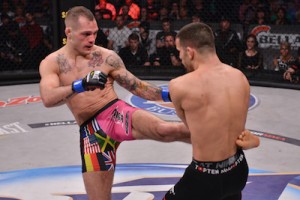 Bellator 123 will come from the Mohegan Sun Arena in Uncasville, Connecticut and will be headlined by Pat Curran defending the featherweight title against Patricio Pitbull.

Bessette (13-5) made it to the semifinals of the season ten tournament and was defeated by eventual tournament winner Daniel Weichel. The defeat to Weichel snapped a five fight winning streak and he has won four of his five fights in Bellator.

Cleve (14-4) also lost to Weichel in the season ten tournament as he was submitted by Weichel in the opening round of the tournament. It was his first defeat since 2012 and snapped a six fight winning streak.

The current Bellator 123: Curran vs. Pitbull II fight card is below.