The UFC has made three bouts official for UFC Fight Night 60 on February 14th in Colorado with the new fights being Michel Prazeres vs. Kevin Lee, Efrain Escudero vs. Rodrigo de Lima, and Jake Lindsey vs. James Moontasri. 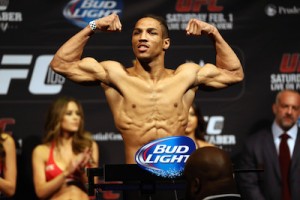 All three fights were recently added to the official fight card on the UFC website.

UFC Fight Night 60 will come from the 1stBank Center in Broomfield, Colorado and the main card will air live on Fox Sports 1.

Prazeres (18-1) has won back to back fights in the UFC after losing his debut to Paulo Thiago in 2013. His most recent victory came in March as he defeated Mairbek Taisumov by unanimous decision. Just like Prazeres, Lee (9-1) has won back to back fights after losing his UFC debut. Both of his UFC wins have come by decision and his last victory came in September against Jon Tuck.

Escudero (22-9) returned to the UFC in September and lost a decision to Leonardo Santos at UFC Fight Night 51. He has gone 4-2 in his last six fights and three of those wins have come by decision. Lima (8-2-1) lost his UFC debut in June when he was defeated by Neil Magny. The defeat snapped a three fight winning streak and it was his first defeat since 2011.

Lindsey (9-2) signed with the UFC in 2014 and has lost both of his fights in the promotion. Both of the defeats have come by stoppage and his last defeat came in October against Olivier Aubin-Mercier. Moontasri (7-2) lost his UFC debut in June when he lost a split decision to Joe Ellenberger. The defeat snapped a three fight winning streak and both of his career defeats have come via decision.

The current UFC Fight Night 60: Brown vs. TBA card is below.