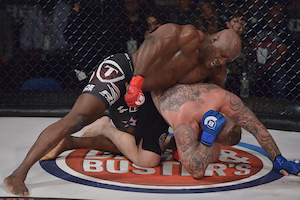 The 38-year-old completely outwrestled Charles and use his strength to wear his opponent out and hurt him with ground and pound. Eventually after Charles amounted practically no offense, referee John McCarthy called the fight with less than a minute left in the second period.

Originally, Lashley was supposed to face James Thompson – the last fighter to beat him. Dan Charles was a late replacement, which was why Lashley didn’t necessarily have a specific game-plan going into the fight.

Regardless of whether he had a game-plan or not, it didn’t take long for Lashley to get comfortable with his approach to the fight.

“Once we took him down the first time, I knew that I could keep him down, punish him down there.”

As far as his next fight, Lashley would like the long-awaited rematch with Thompson, but he’s willing to fight any of the primary figures in the promotion’s heaviest weight class.

“Hopefully [Thompson] can get healthy and get back here,” Lashley said. “If not Thompson, there’s a lot of heavyweights in here. There’s some great fights coming next week, going to look at those and then see what bossman wants us to do. I don’t really call anybody out, just wait for the fights to come.”