Massachusetts bantamweight Rico DiSciullo will be looking to remain unbeaten tonight at CES MMA 30 when he meets Jake Constant on the preliminary card of the event coming from the Twin River Casino in Lincoln, Rhode Island. 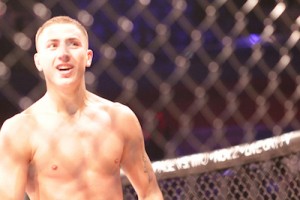 DiSciullo (4-0, 1NC) is coming off a win at CES MMA 27 in January against Mak Kelleher and this will be his third fight in the CES MMA cage.

“First off, I am never underestimating anybody,” DiSciullo told The MMA Report. “Secondly, I love being the underdog. Who doesn’t like being the underdog? You have something to prove and have a chip on your shoulder. He is coming from I think Chicago and he has some experience. I think he has over ten professional fights. He has wrestled. Has a boxing background and has a lot of experience. I am not taking him lightly at all. This has the making of a very exciting fight because I am pretty sure he is going to stand toe to toe with me and throw some leather.

Three of the four wins for DiSciullo have come by decision and his only stoppage victory came in his professional debut at Bellator 98 when he defeated Glenn Allaire by knockout in 81 seconds. With his last three wins coming by decision, is DiSciullo bothered by this?

“Yes, definitely. I think as an amateur rattled off eight or ten finishes in a row and had a bunch of knockouts. I think I tried to force it a little bit early on,” DiSciullo explained. “Just getting back to doing what I do. What I really have to do is just touch my opponent and when the timing is right, snap through a punch and run into something big. That will change the outlook of the fight. I am not going to try to force the knockout, it’s not really how they happen. You have to go with the flow and react rather than thinking about what is going on in the fight. Just let your training take over.”

Will tonight be the night that DiSciullo scores his second career win by knockout? Well, that is the plan for the Team Sityodtong fighter.

“It’s been three fights since a big knockout and I feel it in the air. I feel that first round knockout. I am feeling somewhat of an early knockout for me.”