Two new fights have been added to the UFC 191 preliminary card with the matchups being Andre Fili vs. Clay Collard and Joe Riggs vs. Ron Stallings. 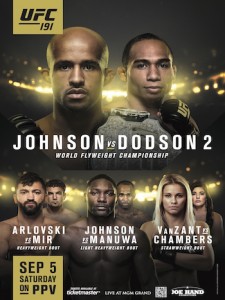 Both fight bookings were added to the official fight card today by the UFC.

UFC 191 will come from the MGM Grand Garden Arena on September 5 and will be headlined by a rematch as Demetrious Johnson defends the flyweight title against John Dodson.

Fili (14-3) has gone 2-2 in the UFC since entering the promotion in 2013. His most recent fight came in March as was defeated by Godofredo Pepey. Collard (14-6, 1NC) is coming off a lost against Gabriel Benítez and he has dropped two of his three fights in the UFC. His only UFC win came against Alex White last year and four of his last five fights have gone the distance.

Riggs (40-16, 1NC) is 0-2 since coming back to the UFC last year. His last fight took place in April at UFC 186 and lost a decision against Patrick Cote. Stallings (13-7, 1NC) made his UFC debut at the beginning of the year and lost to Uriah Hall. He returned in April and scored a decision against Justin Jones.