Former Bellator middleweight champion Brandon Halsey will look to reclaim the 185 pound title next Friday night at Bellator 144 when he meets Rafael Carvalho in the main event of the fight card coming from the Mohegan Sun Arena in Uncasville, Connecticut. 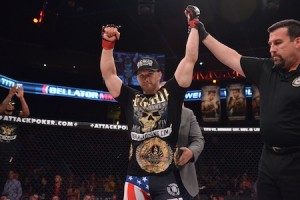 Halsey (9-0) was stripped of the middleweight title earlier this year when he missed weight for his title defense against Kendall Grove at Bellator 137. He would end up defeating Grove by stoppage in the fourth round and recently signed a new contract with the promotion.

On Tuesday’s edition of The MMA Report Podcast, Halsey appeared on the show to discuss what happened earlier this year and whether he had any regrets about taking that fight. Also, he responded to critics that believe he is not a clean fighter, his fight against Carvalho, and if he is interested in a rematch with former champion Alexander Shlemenko.

Check out Halsey’s complete appearance on The MMA Report Podcast below.