The opening bout of the UFC Fight Night 79 preliminary card was a welterweight bout as Dominique Steele scored his first victory in the UFC as he defeated Dong Hyun Kim by stoppage. 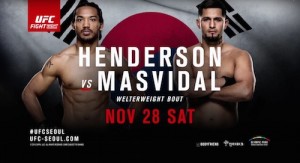 Steele (15-6) scored the stoppage victory at the 27-second mark of the third round when he slammed Kim and landed a couple of short shots on the ground before the referee stopped the fight.

Check out the highlight of the knockout victory by Steele below.