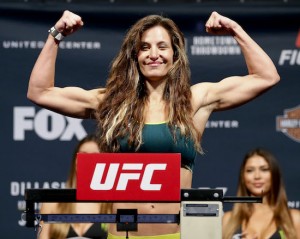 “I don’t think it makes sense to hold up the entire women’s division for nine months,” Tate said. “So I figure if Holly [Holm] and I fought each other, it’s a win-win for the UFC.”

Also, she talked about Ronda Rousey and her recent back and fourth interaction with fellow former title challenger Bethe Correia.

Check out the full interview with Tate from Inside MMA below.