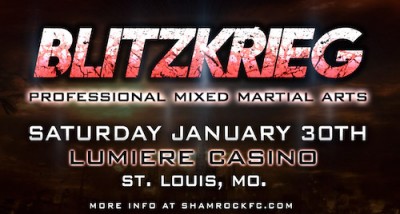 As Sam Tamayo heads into his seventh fight, he knows that you can not be one dimensional in MMA

Amateur Sam Tamayo will return to the cage next Saturday night in St. Louis as he will be looking for his fifth career victory when he faces Oscar Ahuatzi on the preliminary card of Shamrock FC: Blitzkrieg.

Tamayo (4-2) was a high school wrestler and following high school graduation, he was not sure if he wanted to continue to be a wrestler. While he was unsure about continuing in wrestling, he knew that he wanted to compete and he would ultimately decided to try out mixed martial arts.

When some fighters try out mixed martial arts for the first time, they will typically say how they instantly fell in love with the sport. However, that is not the case for Tamayo as it did take some time for him to realize how much he enjoys this sport.

“To be honest, I would come in and it took awhile for me to fall in love with it,” Tamayo told The MMA Report. “After a week or two, I knew then that this was something I wanted to get into. This was something that I just did not just want to participate in, I wanted to be great at. I would say it took awhile. It took like five or six months when I realized that this is something I could see myself doing the rest of my life. When it got to the point where I was at work and I was just thinking about going to practice. All I am thinking about is learning some more techniques. That is when I realized this is taking over my mind and it means I like this sport. I need to work harder and get better.”

With this being the seventh fight of Tamayo’s amateur career, are there any major lessons that he has taken from his previous six fights? The major lesson that he has learned to this point is about how you can not be a one dimensional fighter in this sport.

“One of the major lessons I have learned is you can not just get away with from just being one dimensional. At first, I came in as strictly a wrestler. I was a pretty decent wrestler and I was beating guys. I was taking them down and I was hurting them. But as I got further in the game and training with guys, I started to realizing that if I wanted to be good at this, I needed to add everything. I need to improve my hands. I need to learn more kickboxing. My jiu-jitsu needed to be worked on. I think that is an important lesson I have learned so far.”

On the amateur scene, sometimes fighters may essentially go in blind for the fight since there may not be any footage online of their opponent. While that has been the case for Tamayo in the past, he likes to think about more of what he wants to do in the fight as opposed to what his opponent may want to do.

“I would not say that I have studied him very hard. If there is some video out there, I might look at it once or twice. When I come to fight, I come to fight my fight and fight my style. I am there to do what I want to do. I am not too concerned of what my opponent is going to bring. I am aware that he may have something decently good and I am also aware of what I can do.”