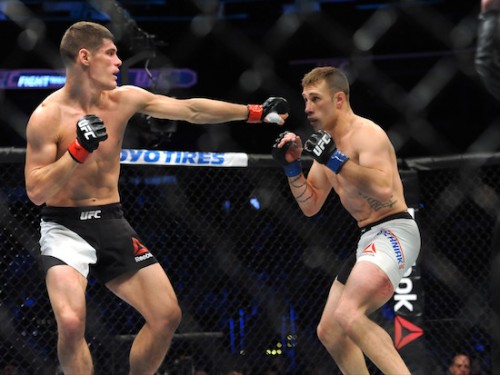 When Kyle Bochniak got signed by UFC on four days notice, his first phone call was to his mother

The UFC returned to Boston earlier this month and the fight card featured the debut of featherweight Kyle Bochniak. He would end up being a late replacement opponent for Charles Rosa and when I say late, he took the fight on four days notice.

For Bochniak (6-1), 2016 started off with a submission win at CES MMA 32 on January 8 in Rhode Island and following that victory, his management reached out to the UFC to see if they were still looking for a replacement opponent for Rosa. At that time, it was known that Jimy Hettes was out of the event with an injury and the promotion was searching for another opponent for Rosa.

However, the UFC informed Bochniak’s team that they already had a replacement opponent. That replacement opponent would be Augusto Mendes and just two days after Mendes accepted the fight, he pulled out of the fight and the UFC immediately turned to Bochniak. Before the fight was official, Bochniak explained on The MMA Report Podcast about all of the medicals he had to get done to be officially in the UFC.

“I was running around all of New England trying to get all of my medicals done,” Bochniak said. “I had to get them all done by that day and if I did not get them done by that day, I would have not gotten the fight. I ran around. Got my eye exam. Did the cat scan, MRI, and started my weight cut immediately. I got it done that day and got my weight down to 145.”

The person who informed Bochniak of the opportunity to fight in the UFC on four days notice was Peter Welch after UFC match maker Sean Shelby reached out to him about Bochniak taking the fight against Rosa. While Welch was the guy who got to tell Bochniak about getting into the UFC, who did Bochniak call first to let them know the great news?

“The first phone call I made to let them know was my mother. My mom has been there through thick and thin. We had a tough life growing up and she has always raised me to be a strong man. My father was not really ever around. It was really big to give her the call to let her know that we made it and it was emotional, but it was a very awesome phone call to make.”

When it came to the fight, he would ultimately lose a decision to Rosa. While the three judges scoring the fight felt that Rosa was the winner, Bochniak feels that he did enough to win a decision.

“Honestly, I feel like I won that fight by split decision,” he explained. “I think I took rounds one and three. I knocked him down a couple of times in round one. I was landing the heavier blows and I was pushing the pace in round three. Round two, he definitely beat my leg up a little bit. So he scored more on points, but it was a very close fight. I don’t know what judge scored all three rounds for him, but that was totally bogus.”

“In the end, if he did win, it would be by split decision,” Bochniak continued. “But I feel like I should have gotten the split. Maybe they favored him more because it was his fourth fight. Second time fighting in Boston. It was a very close fight and to be honest, I am happy with my performance in my UFC debut and I know I will get another opportunity. I will be 100 percent ready for that one.”

Bochniak is already back in the gym and is hoping to return to the octagon in the next three to six months. He does not want to wait any longer than six months for his next fight and he has no preference in his next opponent, he just wants to have a full camp to prepare for that fight.