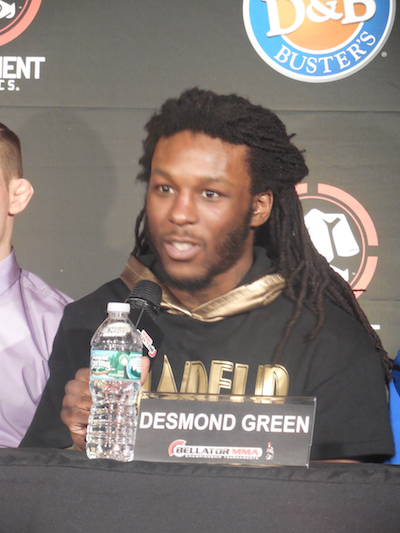 When Titan FC 37 was initially announced, it was revealed that former Titan FC featherweight champion Desmond Green was slated to move up to the lightweight division to face veteran Pat Healy. However, it was announced on Monday that Green was out of the event and Healy would now be facing Muhsin Corbbrey.

Following the news of Green no longer being on the event, The MMA Report reached out to Green to find out the exact reason he was off the card. Green explained that he was actually a free agent and has decided to leave Titan FC to compete in the upcoming Akhmat Grand Prix lightweight tournament in Russia.

“It so happened that I was a free agent at the time and I was thinking about fighting Healy,” Green told The MMA Report. “I like Titan and everything but I got a better offer with the Russian tournament called the Akhmat Grand Prix. It’s a really highly decorated tournament in Russia. Three round tournament, eight man bracket. It’s good money and a good promotion. It was the best move career wise for me to try to get into the tournament and win it.”

“The Akhmat Grand Prix is a highly decorated tournament,” he continued. “A lot of people say that if you win the tournament — the UFC pretty much puts an eye on you. I figured that I already got my name out there so what better way to up my stock to go over to Russia and winning this tournament. I think this is definitely a good career move for me. It’s also a way to keep me active. Tournament format — as long as I win, I will keep having fights so I am excited.”

Green (15-5) is very familiar with the tournament model in mixed martial arts as he was a participant in the Season 9 and Season 10 Bellator featherweight tournaments. He was a finalist during the Season 10 tournament and he knows that his experience in those tournaments will be key for him heading into the Akhmat Grand Prix.

The Akhmat Grand Prix lightweight tournament will begin on March 12 and Green will be facing David Cubas in the opening round. Cubas (17-3-2) is unbeaten in his last twelve fights and his last two fights have ended in a draw. Green has seen some video on his opponent and he has a good idea on that type of guy he will be facing in the opening round.

“I have watched some video and I have not fought that type of opponent, but I have definitely practiced with his style a lot. He is 5’6, so he is a shorter guy. I am 5’10. So I know he is not going to want to really stand in this fight. He is like a wrestler but not really a true wrestler. He is more of a grinder wrestler. Kind of remind me of Will Martinez who I fought in the semifinals of the Bellator tournament. I got a game plan ready for him. I am pretty confident in the first round that I will be able to secure the win.”

If Green is able to get the win against Cubas, he will advance to the semifinals in May and if he can make it to the final of the tournament, that fight is slated to take place in August.