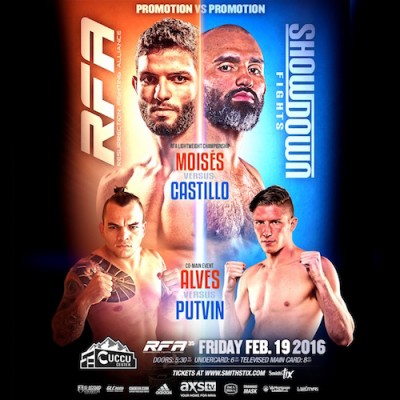 Friday night’s RFA 35 on AXS TV will feature a matchup of two heavyweight prospects as Curtis Blaydes will look to remain undefeated in his young career as he will be facing Luis Cortez.

Blaydes (4-0) made his pro debut in 2014 after going 10-0 as an amateur and his pro debut came against former Bellator heavyweight Lorenzo Hood. At that time, Hood was 5-0 in his career and Blaydes would end up scoring a stoppage victory in the opening round.

While Blaydes is young in the sport, he has been given the opportunity to train with heavyweights that have made it to the UFC including top title contender Stipe Miocic and current UFC heavyweight champion Fabricio Werdum. From his time training with those guys, Blaydes took one major learning lesson.

“You can’t be afraid of these guys,” Blaydes explained to The MMA Report. “They are normal guys like me. They breath just like I do. If you go in there with any apprehension, hesitation, or fear — they are going to smell it. They are going to kill you in there. You have to be ready to go in there and fight. That is a lesson I learned with Stipe. The first time that we sparred, I was real hesitant and he took advantage of that. I learned from that day on that, I had to get more aggressive and just get in there and spar.”

Coming up on Friday, he will be meeting an opponent that is coming off a quick victory as Cortez defeated Colton Vaughn in 23 seconds at Front Street Fights 6 in September. While preparing for this fight, Blaydes knows that he has to be looking out for the lead hook that Cortez will be looking to throw and believes his key to walk away with the victory is to get the fight to the ground.

“As soon as I get it on the ground, it will be over,” Blaydes predicted. “The quicker I get him to the ground, the quicker the fight is over. I want to take the least amount of kicks I can. That is the game plan.”

The goal for Blaydes in this fight is to show the entire mixed martial arts community that he is ready for the opportunity to fight in the octagon. With that being said, would Blaydes be open to signing with Bellator if they made him a contract offer?

“I guess, if they gave me a really good offer,” he explained. “I will be open to it, but my ultimate goal is to get to the UFC belt. That is really what I am focusing on. The UFC.”