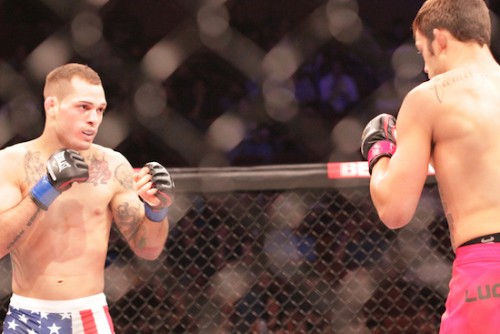 Former Bellator featherweight tournament semifinalist Matt Bessette will be returning to the CES MMA cage next month when he meets Tito Jones at CES MMA 33 on March 11 in a 145 pound bout.

The fight booking was announced by CES MMA officials on Tuesday.

CES MMA 33 will come from the Twin River Casino in Lincoln, Rhode Island and will be headlined by a title fight as Andre Soukhamthath and Kody Nordby will battle for the inaugural CES MMA bantamweight title.

Bessette (16-7) is coming off a submission win at Bellator 144 against Kevin Roddy and he has won three of his last four fights. This will be his third fight in CES MMA and he has gone 1-1 in his previous fights in the promotion.

“I’m always excited to fight for CES MMA, and this one is no different,” said Bessette. “I’ve seen a few of Tito’s fights online. He’s a striker — that’s his strength and where he likes to be. My fans have seen me enough to know that I’m comfortable with strikers and I’m comfortable with grapplers. I’m going out there and do what I’ve gotta do to get the job done.”

Jones (11-8) will be making his CES MMA debut in this fight and enters this fight following a lost to Timur Valiev at WSOF 23. He is 4-2 in his last six fights and two of those wins have come by TKO/KO.

“I want to do the best that I can do,” Jones said. “That’s what I’m focused on. If I do my best, I have full confidence that I’m going to win. I try to maintain a certain level of happiness all the time. If I win, I win. If I lose, I lose. I’m happy to be there — that’s the biggest thing, and fans are going to know that right away — but of course I’m preparing to do my best.”

The current CES MMA 33: Soukhamthath vs. Nordby fight card is below.