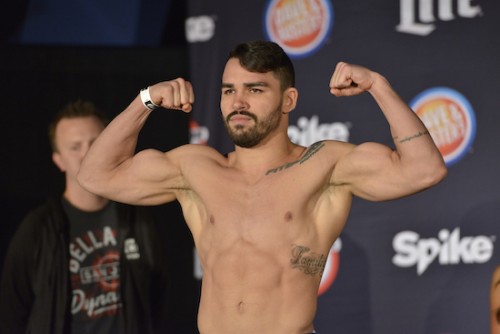 Patricky Pitbull responds to comments made by Melvin Guillard

The exchange of words between Bellator lightweights Melvin Guillard and Patricky “Pitbull” Freire began shortly after Bellator 148 last month and it continued on Thursday afternoon when Guillard explained to The MMA Report why he is not fighting Pitbull next Friday night at Bellator 149.

First of all I want to make it clear I don’t have anything personal against Melvin. It’s the other way around. I always admired his style and watched his fights, that’s why I’ve called him out, I think we’d have a very exciting match. Everything’s been professional on my part. Right after I beat Ryan, Bellator asked me if I’d step up to fight Melvin and I said yes. They asked if I could send a message, so I did it. There was nothing disrespectful on that. And I did it in English. I found it funny he said he is American and speaks American. Someone tell him his language’s name is English, and that’s exactly what I used to call him out. Maybe he didn’t even see the call out video and the tweets, someone must have told him about it and he got pissed off (laughs).

Every time I call a fighter out they get offended. I don’t get that. That’s a good thing. It’s the fight game, people want to see us fight. Be happy I’m calling you out and promoting it. I don’t get these people who call themselves fighters getting all sensitive when they hear I said their names.

Melvin just showed he’s not the smartest guy out there. The only thing he said that makes sense is not coming from a long layoff straight into a tough fight. But that also shows I’m exactly right on what I said before. He’s not here looking to jump straight into the top. I don’t blame him. I’ve said before, he’s got over 50 fights, he deserves to have some tune up fights, easy pays and set himself up for retirement. I don’t have anything against him in that regard. But he came to Bellator talking about being champion. If you come here to be champion, you don’t turn down a big fight. Me and anyone else from the roster who decides to call him out on it have a right to. The guy was preparing for a fight for months, I was coming from a fight on short notice and was offered another one on short notice. He had all the advantages and said no, I can say whatever I want after that.

Everything else just looks like he’s being delusional or he’s just talking about things without having any idea about it. His assessment of my fight against Ryan Couture is completely off. His assessment of me as a fighter is completely off. It’s interesting he says he doesn’t want to jump in against a top 5 guy after a six months layoff and then he says I’m an easy fight and he’s got one hundred ways to beat me.

Me against Melvin Guillard would be an exciting match for the fans, but it would end up with him being knocked out cold. I wouldn’t need to take him down and submit him, which would happen in less than 10 seconds. I’d knock him out, that’d probably take a minute or two. But it’d be an exciting minute. Maybe round of the year contender. He knows that, and that’s why he said no right now. He wants to get a win under his belt because starting his Bellator run with 2 losses would look bad.

I already have a fight lined up, a very important one, so this Guillard fight will have to wait a bit more. It’ll also depend on him getting past Derek Campos and let’s make it clear, Derek is not an easy pay day. Melvin took this fight thinking it was, but his night could end just as bad as it did against Girtz. Derek Campos is being underestimated not just by him, but everybody due to his last two fights, that’s not a smart thing to do.

If it’s up to me I’ll fight and win ten times this year. Melvin missed his opportunity. I’m climbing up the ladder and I have no intention of letting my career regress. But I have a strong desire to not just win but be busy, so maybe he can do his part and thank my desire to fight for allowing us to meet in the future. If that’s really his wish, that is.

I’d like to use this opportunity to let fans, specially video makers, to know me and Patricio are doing a Pitbull Brothers Highlight Video Contest, check our timelines on Twitter to know how to participate and the winner prize!”

After hearing what Guillard said earlier and reading the statement from Pitbull above, it would appear that these two lightweights are on a collision course to face each other at some point in the Bellator cage.