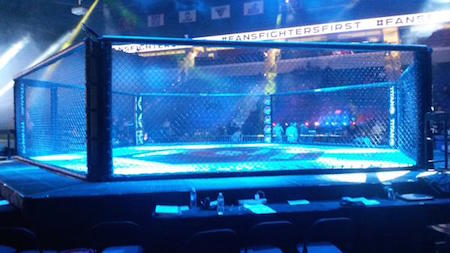 Welterweight Ben Egli was officially signed to Titan FC last year on Thanksgiving Day as he signed a four fight deal with the promotion and he will make his promotional debut next month at Titan FC 37 as he takes on veteran EJ Brooks.

Egli (6-0) has won all of his fights by stoppage in the opening round and he is coming off his first career victory by knockout as he defeated David Evans in 56 seconds at King of the Cage last June. It was a clean knockout for Egli and he considers the victory one of his most memorable since he decided he wanted to be a mixed martial arts fighter.

Just like a lot of young fighters, Egli introduction to the sport came from The Ultimate Fighter reality show. He tried out for the show last year, but ultimately would not be casted for the show. He enjoyed the experience of the tryout and took away some valuable learning lessons.

“It was quite an experience. It was something. I watched the first season of The Ultimate Fighter when I was still in high school,” Egli told The MMA Report. “It was always something I had thought about. When my weight class was up the previous time was three or four years before that. I did not have a professional record at that time so I had to miss it. When that came up, I said this is my time. I got to do it. I told my boss — as soon as my manager contacted me. I said ‘hey, I am going to need some days off. I am going to try out.’ It was interesting being there with some many other fighters from around the country and things like that. There was a good group of northwest guys out there so we all kind of knew each other and that was nice.”

“There were three rounds of cuts. I dominated the guy I grappled,” he continued. “Tapped him once and almost finished him again in a 90 second round. Striking looked good and made it to the interview process, which only about 30 of us welterweights made it to. Got to kind of see how the UFC works a little bit. Got to see other guys how they handled the pressure of being in such an important place and in front of a lot of important people. Even though I did not make it, it was a great experience and a know a lot more about that kind of world.”

On March 4 at Titan FC 37, he will look to show the match makers at the UFC that he is somebody they should be looking to sign when he takes on Brooks. He understands the type of challenges that Brooks will bring to the cage and he is looking forward to this challenge.

“He is built like a tank. He is an athletic guy and has a strong wrestling background,” Egli explained. “If you looked at it on paper, I think technically his wrestling would be better. Again if you look at it on paper, he is a southpaw. Dangerous guy. Looks like he has a pretty good gas tank. It’s going to be a fun challenge that I am happy to take on.”

If Egli is able to secure the victory against Brooks, it would continue his undefeated streak and put himself in the conversation as one of the next fighters to leave Titan FC for the UFC. To walk away with the victory, Egli knows that using his length will be a huge key to victory.

“I am going to have to use my length. I am going to be quite a bit longer. I am taller and I am pretty much all arms and legs. I am looking to take the center. Show that cage control. Keeping my strikes long and if it gets close, that fine. We can play the clinch game. I will probably use my wrestling more in a counter wrestling as opposed to offensive wrestling. If it does go to the ground, use my jiu-jitsu and if I don’t like being on the ground, I will just get back up to my feet again. Control the center and use my long reach.”