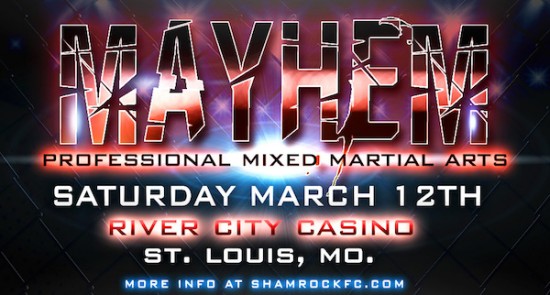 Shamrock FC Mayhem: Kevin Engel explains why he feels Kyle Kurtz is a good matchup for him

The main event of Saturday’s Shamrock FC: Mayhem inside the River City Casino in St. Louis, Missouri will be a welterweight bout as Kevin Engel looks to remain undefeated when he faces Kyle Kurtz.

This is actually the second time this fight has been booked as they were initially scheduled to meet on the preliminary card of Bellator 145 in November. However, Engel would have to pull out of that fight and Kurtz would end up defeating Steven Mann by submission.

On yesterday’s edition of “The MMA Report Podcast,” Engel was a guest on the show to preview his fight on Saturday night against Kurtz. He talked about being this being the second time he has prepared to face Kurtz and explained why he feels this is a good matchup for him.

“Everything is just the same,” Engel said on The MMA Report Podcast. “I thought he was a good matchup for me then and I still think he is a good matchup. I think he is matchup I should win. But also I think it’s a matchup that is going to make an entertaining fight for the fans. I think he is going to stand up with me and even if he wants to take it to the ground, I don’t think his wrestling is good enough to get me to the ground. A good standup fight is where I want it and I think what the fans want to see is a knockout.”

Check out Engel’s complete interview from yesterday’s episode of “The MMA Report Podcast” below and be sure to subscribe to the show on iTunes and Stitcher.