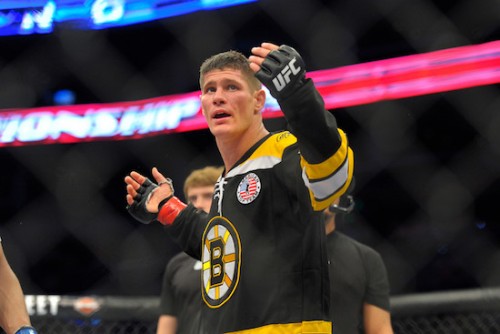 Rosa (11-2) has won a fight night bonus in two of his four fights in the promotion and he was a guest on Tuesday’s edition of “The MMA Report Podcast” to talk about what has been going on with him since his victory over Bochniak. At the beginning of his appearance on the show, he talked about receiving his jiu-jitsu black belt last week at American Top Team.

“I did not know it was coming,” Rosa said. “I have been working hard in the gym obviously. I just got that win in January against Kyle and I was looking to get a quick turnaround again, which did not quite happen for the UFC. So I was able to focus on some other things. Trying to get back to my roots in jiu-jitsu and doing what I really love to do. Training really hard and staying in shape.”

“I think the timing just worked out,” he continued. “My first trainer and MMA coach Charles McCarthy, he told me that he thought I was ready for my black belt. And a couple of days later, Master Ricardo Liborio sent me a message and told me to bring my Gi and come to a class. I came and everyone was there. It was a huge ceremony and they promoted me. There was about 15 black belts on the mat. It was definitely a pretty special night. I was really honored and proud to accept it. It was something I worked hard for so I was happy to get it.”

Check out Rosa’s complete interview from Tuesday’s episode of “The MMA Report Podcast” below and be sure to subscribe to the show on iTunes and Stitcher.