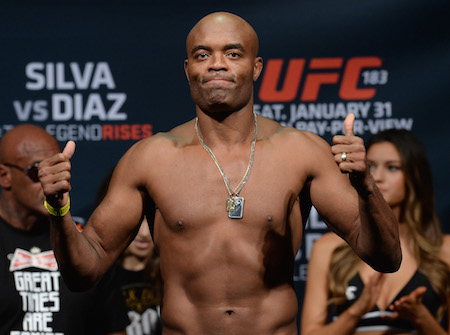 Anderson Silva out of Saturday’s UFC 198 due to illness

Former UFC middleweight champion Anderson Silva was scheduled to return to the octagon on Saturday night at UFC 198 against Uriah Hall, but “The Spider” has been pulled from the event due to illness.

The news of Silva being out of the event was reported by Kevin Iole of Yahoo! Sports on Tuesday evening. Per Iole’s story, Silva started feeling ill on Monday and may end up having gall bladder surgery.

Following the article by Iole, the UFC released a statement on the promotions website and stated that it’s unknown at this time if Silva’s original opponent, Uriah Hall will remain on the fight card.

“The homecoming fight of Anderson Silva in Curitiba will not be taking place this weekend, as the former middleweight champion has been forced off Saturday’s UFC 198 card due to an illness,” the UFC statement said. “The UFC is currently exploring potential replacements to face Silva’s opponent, Uriah Hall, but it is not certain whether he will remain on the card or not.”

The current UFC 198: Werdum vs. Miocic fight card is below.