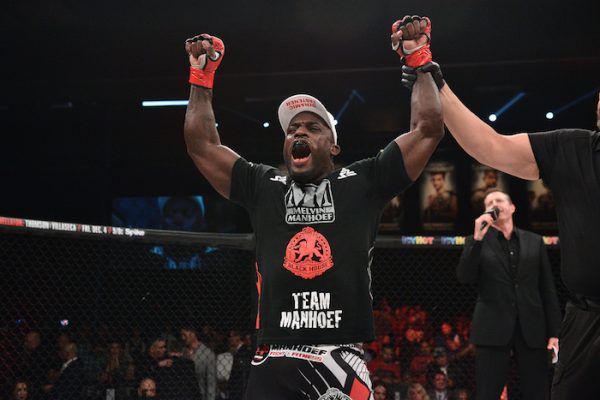 Bellator 155 will take place tonight at the CenturyLink Arena in Boise, Idaho and will be headlined by a title fight as Rafael Carvalho defends the middleweight title against Melvin Manhoef.

Along with the title fight, the main card on Spike will feature a key matchup in the featherweight division as former Bellator champion Pat Curran looks for his second straight victory when he meets Georgi Karakhanyan in the co-main event of the fight.

Rafael Carvalho (12-1) vs. Melvin Manhoef (30-12-1, 2NC)
Carvalho became the Bellator middleweight champion last year at Bellator 144 when he defeated former champion Brandon Halsey by knockout in the second round to claim the vacant title. He enters this fight riding a twelve fight winning streak and three of those wins have come in Bellator.

Manhoef made his Bellator debut in 2014 and has gone 2-1, 1NC in the promotion. Both of his wins in the promotion have come by knockout in the first round and those victories came against Doug Marshall and Hisaki Kato.

Pat Curran (21-7) vs. Georgi Karakhanyan (24-5-1)
Curran returns to the Bellator cage for the first time since June of last year, which was a decision victory over Emmanuel Sanchez. The victory snapped a two fight losing streak and he is 2-3 in his last five fights.

Karakhanyan has gone 1-1 since returning to Bellator at the beginning of 2015 and he enters this fight following a decision lost to Daniel Weichel at Bellator 147. He is 10-2 in his last twelve fights and six of those wins have come by submission.

This will be the fifth fight in Bellator for Sakai and he is coming off a decision win against Alex Huddleston at Bellator 145 in November. Three of his four victories in Bellator have come by stoppage and he has only gone the distance twice in his career.

Marloes Coenen (23-6) vs. Alexis Dufresne (5-2)
Coenen signed with Bellator in 2014 and has won both of her fights in the promotion by submission. Her most recent win came in August at Bellator 141 as she defeated Arlene Blencowe by armbar in the second round.

Dufresne is making her Bellator debut and will be looking to snap a two fight losing streak. Both of those defeats came in the UFC and her last win came in February of 2014 against Kim Couture.

Gormley signed with Bellator last year after winning the vacant Titan FC heavyweight title against Jon Madsen. He lost his Bellator debut against Charles and the defeat snapped a five fight winning streak.

The current Bellator 155: Carvalho vs. Manhoef fight card is below.