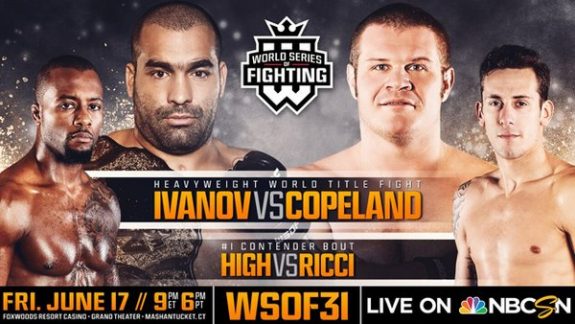 The next World Series of Fighting (WSOF) event will be taking place next month in Connecticut and the complete seven fight preliminary card was announced by the promotion including a heavyweight bout between Lorenzo Hood and Tyler King.

The complete preliminary card was released on the WSOF website and the other six preliminary bouts are Juliano Coutinho vs. Justin Willis, Tom Marcellino vs. Devin Powell, Robert Fonseca vs. Sean Lally, Saul Almeida vs. Bruce Boyington, Rodrigo Almeida vs. Ben Pierre-Saint and Sam Watford vs. Christian Torres.

WSOF 31 will come from the Foxwoods Resort Casino in Mashantucket, Connecticut on June 17 and will be headlined by a title fight as Blagoy Ivanov defends the heavyweight title against Josh Copeland.

Hood (9-3) will be making his WSOF debut and enters this fight following a submission lost in November against Shelton Graves at Global Proving Ground 22. The defeat snapped a three fight winning streak and all nine of his victories have come by TKO/KO. King (10-4) is coming off a 51 second submission win last month at CES MMA 35 against Eric Bedard and he is 3-2 in his last five fights. Eight of his ten wins have come by stoppage and five of those wins have come by submission.

The current WSOF 31: Ivanov vs. Copeland fight card is below.