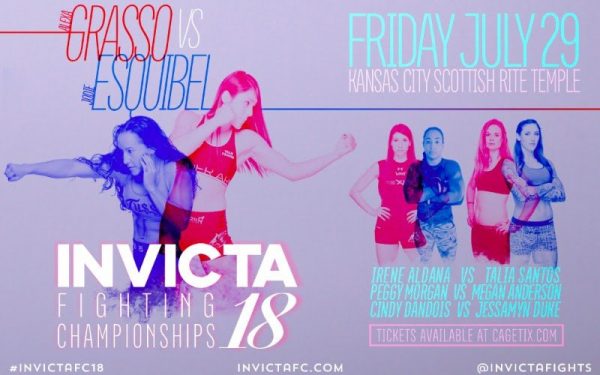 Invicta FC will be returning to Kansas City next month and the event will be headlined by a strawweight bout as Alexa Grasso will look to remain undefeated when she meets Jodie Esquibel on the fight card coming from the Scottish Rite Temple.

Along with announcing the main event of Invicta FC 18, the promotion also announced six other fights with the matchups being Irene Aldana vs. Taila Santos, Agnieszka Niedzwiedz vs. Claudia Rey, Cindy Dandois vs. Jessamyn Duke, Megan Anderson vs. Peggy Morgan, Manjit Kolekar vs. Lynn Alvarez and Sijara Eubanks vs. Amberlynn Orr.

Invicta FC 18 will be streamed exclusively on UFC Fight Pass and ticket information will be announced shortly by the promotion.

Grasso (7-0) enters this fight following a decision win last year at Invicta FC 11 against Mizuki Inoue and she is 3-0 in Invicta FC. Four of her seven wins have come by TKO/KO and all of those wins have come in the first round. Esquibel (5-1) made her Invicta FC debut in 2013 and has won three of her four fights in the promotion. She enters this fight with back to back victories and her move recent win came at Invicta FC 9 against Nicdali Rivera-Calanoc.

The current Invicta FC 18: Grasso vs Esquibel fight card is below