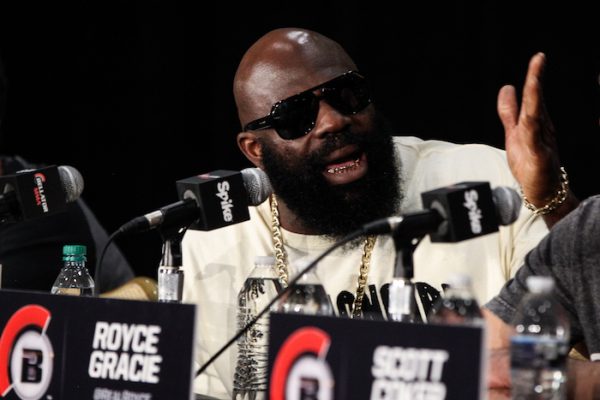 Kimbo Slice: One of a Kind debuts tomorrow at 7 p.m. ET/PT on Spike

Prior to tomorrow night’s Bellator 157: Dynamite 2 main card, a one-hour original documentary on the life of MMA icon Kevin “Kimbo Slice” Ferguson will debut on Spike at 7 p.m. ET/PT.

“Kimbo Slice: One of a Kind” will take a look into the life of the man we got to know from his You Tube street fight videos to his mixed martial arts fights in various promotions including Bellator MMA.

Details on the one-hour documentary via a Spike press release is below.

The documentary gives viewers an inside look at Kimbo’s legendary rise to prominence as a Miami street fighter and YouTube sensation with rarely before-seen-footage and interviews with those who were with him from the start. From feared street fighter to globally-renowned MMA sensation, Kimbo became one of the sport’s first mainstream and crossover stars. He fought on the first ever MMA fight on a broadcast network in American history, drawing record viewership along the way.

During his dramatic ascent to stardom and highly-publicized career, Kimbo maintained a fierce loyalty to his loving family and close knit friends. “Kimbo: One of A Kind” will be the definitive look at this inspirational cage warrior told by the people who knew him best.

The Executive Producers for “Kimbo Slice: One of A Kind” are Kevin Kay, Scott Coker, Scott Fishman and Jason Teiken serves as Producer and Writer. Michael Sarnoski is the Vice President of Production and Kevin Connolly is a Producer on the documentary.

Check out a preview of the one-hour documentary on Slice below.