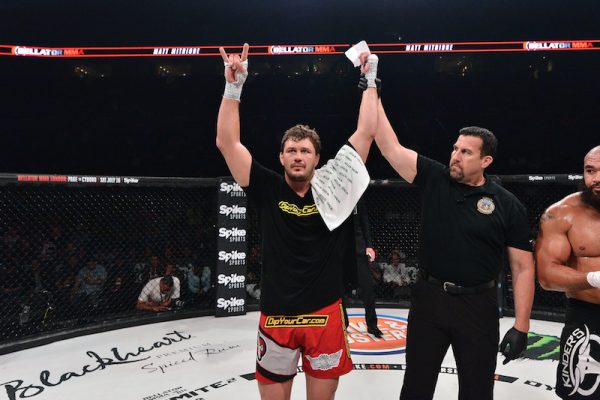 Last night was a night of firsts for heavyweight Matt Mitrione. It was his Bellator debut and was his first mixed martial arts fight to take place outside of the UFC.

He entered Bellator after exploring free agency and there were some expectations placed on him heading into his promotional debut against Carl Seumanutafa. While the fight got off to a rough start for Mitrione, he ended up winning by knockout in the opening round.

The victory for Mitrione (10-5) snapped a two fight losing steak and this is his first victory since defeating Gabriel Gonzaga at UFC on FOX 13 in late 2014. After the conclusion of Bellator 157: Dynamite 2, Mitrione admitted in the post fight press conference that he was actually nervous for his Bellator debut.

“I have always said I don’t get nervous, don’t feel pressure for fights,” Mitrione stated during the post fight press conference. “I think maybe because of the stage I have always been on in my life. But this, I was actually nervous for this fight. I had anxiety. I was nervous and I was even telling my ex-wife, I feel anxious. It’s a really odd feeling. I don’t know if it’s pressure, expectations, new promotion, the unknown or the quantities of what goes on. But I had nerves in this one for sure. Maybe that is why I left myself open. Ate on right down the pipe. But whatever it is, I am glad it ended up the way it is.”

The next fight for Mitrione is slated to take place next month at Bellator 158 against Oli Thompson. The fight booking was announced by the promotion following Mitrione’s victory and the promotion has publicly stated that this fight booking is not official until Mitrone is medically cleared for the fight