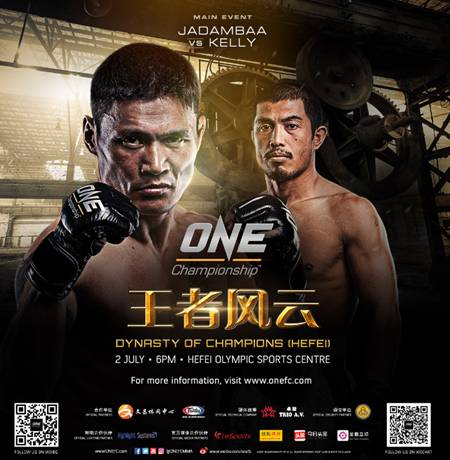 Narantungalag Jadambaa vs. Eric Kelly headlines ONE: Dynasty of Champions on July 2

Former ONE Championship featherweight champion Narantungalag Jadambaa will look for his second straight victory next month at ONE: Dynasty of Champions in China as he will meet Eric Kelly in the main event of the fight card.

The fight booking was announced by ONE Championship on late Sunday evening in a press release.

ONE: Dynasty of Champions will come from the Hefei Olympic Sports Center and tickets are currently on sale.

“It feels so good to return to China where we know a lot of MMA fans are hungry for more world-class mixed martial arts action,” ONE Championship CEO Victor Cui said. “We have some great matchups to look forward to along with an exciting flyweight tournament featuring local homegrown talent. Our main event between Narantungalag Jadambaa and Eric Kelly also promises another memorable battle that fans will not want to miss.”

The current ONE: Dynasty of Champions fight card is below.