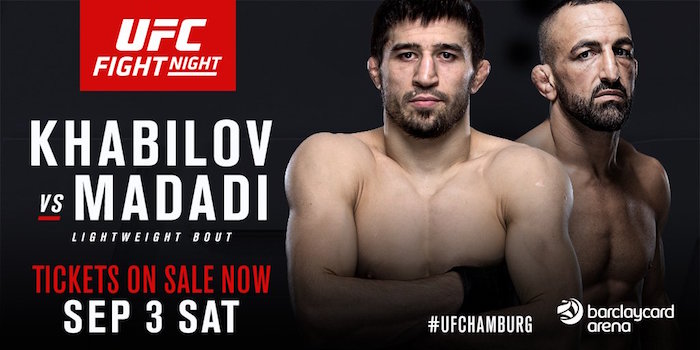 A lightweight bout has been added to the UFC Fight Night card on September 3 in Hamburg, Germany as Rustam Khabilov will meet Reza Madadi.

UFC Fight Night Hamburg will come from the Barclaycard Arena in Hamburg, Germany on September 3 and will be headlined by a heavyweight bout as Andrei Arlovski meets Josh Barnett.

Khabilov (19-3) has gone 5-2 in the UFC since entering the promotion in 2012 and he enters this fight with back to back victories. His most recent win came in May as he defeated Chris Wade by unanimous decision. Madadi (14-4) will also enter this fight following a victory in May as he defeated Yan Cabral by TKO. He has alternated wins and losses in his last four fights and will be looking for back to back victories for the first time since 2012.