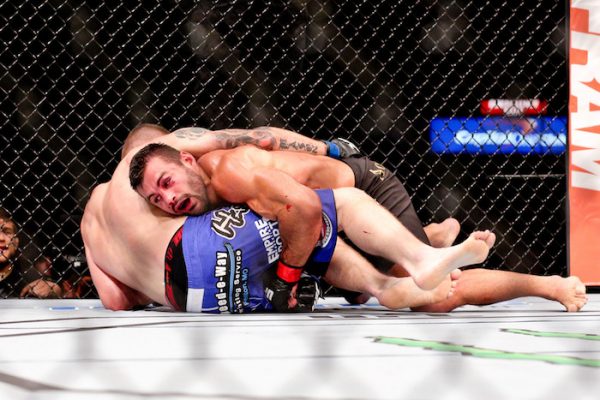 UFC middleweight Ricardo Abreu has received a two year suspension from USADA for a failed out-of-competition drug test that he submitted earlier this year.

The suspension of Abreu was announced by USADA in a press release today and confirmed that Abreu tested positive for 19-norandrosterone and 19-noretiocholanolone.

The complete statement from USADA on the suspension of Abreu is below.

USADA announced today that UFC athlete Ricardo Abreu, of Albuquerque, N.M., has received a two-year sanction for an anti-doping policy violation after testing positive for a prohibited substance.

Abreu, 32, tested positive for 19-norandrosterone (19-NA) above the decision limit of 3 ng/mL and 19-noretiocholanolone following an out-of-competition urine test conducted on June 3, 2016. Both substances are metabolites of anabolic steroids prohibited under the UFC Anti-Doping Policy, which has adopted the World Anti-Doping Agency (WADA) Prohibited List.

Anabolic agents are listed as Non-Specified Substances on the WADA Prohibited List. Under the UFC Anti-Doping Policy, the standard sanction for an anti-doping policy violation involving a Non-Specified Substance is a two-year period of ineligibility. UFC athlete Ricardo Abreu, of Albuquerque, N.M., has received a two-year sanction for an anti-doping policy violation after testing positive for a prohibited substance.

Abreu’s two-year period of ineligibility began on July 1, 2016, the date on which he was provisionally suspended by USADA. In addition, Abreu has been disqualified from all competitive results obtained on and subsequent to June 3, 2016, the date of sample collection, including forfeiture of any title, ranking, purse or other compensation.

USADA conducts the year-round, independent anti-doping program for all UFC athletes. USADA is an independent, non-profit, non-governmental agency whose sole mission is to preserve the integrity of competition, inspire true sport, and protect the rights of clean athletes. The anti-doping program run by USADA for UFC athletes includes education, science and research, testing, and results management. Official UFC Anti-Doping Program information and athlete resources are available at UFC.USADA.org.