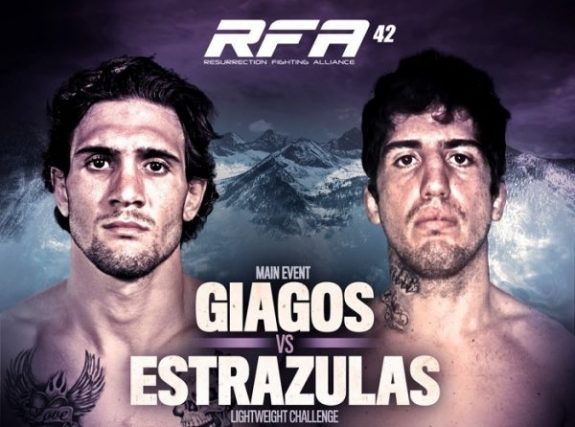 Zach Juusola is out of this month’s RFA 42 main event against Christos Giagos due to undisclosed reasons and stepping up to meet Giagos in two weeks will be BJJ black belt Arthur Estrázulas.

The fight change was announced by RFA in a press release on Friday.

RFA 42: Giagos vs. Estrázulas will come from the Visalia Convention Center in Visalia, California on August 19 and the main card will air live on AXS TV.

Estrázulas (8-2) is currently on a three fight winning streak and is coming off a TKO win against Daniel Vasquez at Combate Cotas MMA 2 in June. This will be his RFA debut and five of his eight wins have come by submission. Giagos (12-5) is coming off a TKO win against Karen Darabedyan at RFA 38 and the victory snapped a two fight losing streak. He is 6-3 in his last nine fights and all of those victories have come by stoppage.

“Christos Giagos vs. Arthur Estrázulas is the new main event of RFA 42 on August 19th,” stated RFA President Ed Soares in press release announcing the new main event of RFA 42. “Giagos was the first RFA lightweight champion and he’s looking to earn another shot at RFA gold. Estrázulas is an exciting BJJ black belt from Brazil. I’m looking forward to this headliner and our first trip to Visalia.”

The current RFA 42: Giagos vs. Estrázulas fight card is below.