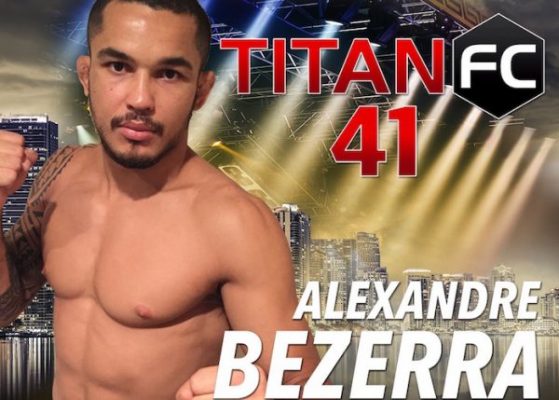 The co-main event of Friday’s Titan FC 40 will be a title fight as Alexandre “Popo” Bezerra will make his promotional debut as he will challenge featherweight champion Andre Harrison on the fight card coming from the BankUnited Center in Coral Gables, Florida.

Bezerra (19-4) is mainly known in the mixed martial arts community for his time in Bellator as he was a participant in the season six and eight featherweight tournaments. Since his exit from Bellator in 2013, he has gone 4-1 and he explained on this past Wednesday’s edition of “The MMA Report Podcast” how he has changed as a person since his time in Bellator.

“I don’t think I have change as a fighter, I’ve changed as a person,” Bezerra explained. “I changed the way I see the fights. How I think about it. I think like a new person right now. I think I am way more pro than I was before. Before, I was just fighting for fun and see what happen. I use to not even watch my opponent fight or not even know that name. I was just like, ‘let’s do it and have fun.’ Now I am another person. I try to read I can about the person. Try to watch everything I can about my opponent. I try to learn everything. The way he fights. The way he thinks. Try to learn everything. So now I think I’m another person. I am like a pro athlete.

Check out Bezerra’s complete interview from Wednesday’s episode of “The MMA Report Podcast” below and be sure to subscribe to the show on iTunes and Stitcher.