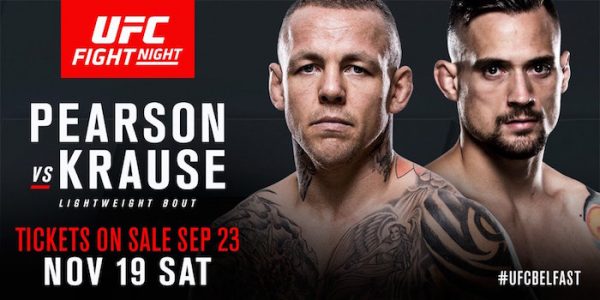 After taking a short notice fight at welterweight, Ross Pearson will be returning to lightweight at UFC Fight Night 99 on November 19 as he will meet James Krause.

UFC Fight Night 99 will come from the SSE Arena Belfast and will be headlined by a welterweight bout as Dong Hyun Kim meets Gunnar Nelson.

Pearson (19-12, 1NC) enters this fight with back to back defeats and is 1-3 in his last four fights. His last fight took place in July at UFC 201 and he lost a decision against Jorge Masvidal. Krause (23-7) has won back to back fights and is coming off a decision win in February against Shane Campbell. Since entering the UFC in 2013, he is 4-3 in the promotion and three of those victories have come by stoppage.

The current UFC Fight Night 99: Kim vs. Nelson fight card is below.