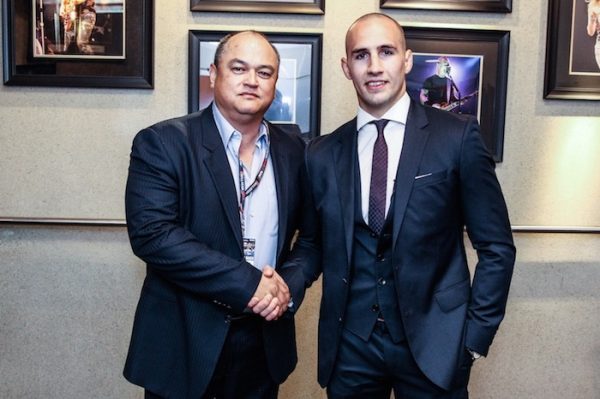 Bellator 179 takes place tomorrow at the Wembley Arena in London, England and will be headlined by a title eliminator fight in the welterweight division as former UFC title challenger Rory MacDonald will make his promotional debut as he will meet Paul Daley.

In the co-main event of the fight card, former Bellator light heavyweight champion Liam McGeary will look for his second straight victory since losing the Bellator title against Phil Davis as he will meet Linton Vassell in a matchup that could determine the next title challenger in the Bellator 205 pound division.

Now let’s take a closer look at the five fights that will take place on the main card of Bellator 179.

Paul Daley (39-14-2) vs. Rory MacDonald (18-4)
Bellator 179 will mark the seventh fight in Bellator for Paul Daley and he enters this fight following a knockout of the year candidate victory over Brennan Ward at Bellator 170 in January. His only defeat in Bellator came last year against current Bellator welterweight champion Douglas Lima and he is 10-2 in his last 12 fights.

Rory MacDonald was signed by Bellator last year and this will be his first fight in 11 months as he is coming off a decision defeat against Stephen Thompson at UFC Fight Night 89. He is 3-3 in his last 6 fights and 2 of those 3 defeats came against former UFC welterweight champion Robbie Lawler.

Since dropping a decision to Lawal in the one-night, four-man light heavyweight tournament in 2015, Linton Vassell has won back to back fights by decision and his most recent win came in November at Bellator 165 against Francis Carmont. Both of his recent victories have come by decision and he’s 6-2 in Bellator.

Augusto Sakai is coming off a majority draw against Dan Charles at Bellator 155 and he is 3-0-1 in Bellator. After starting his career with 4 straight victories coming in the opening round, 4 of his last 6 fights have made it to the 3rd round.

Dan Vinni (14-14) vs. Alex Lohore (10-1)
After dropping 6 straight dights in 2014 and 2015, Dan Vinni is making his Bellator debut following back to back victories. His most recent win came in December at European Beatdown 1 as he scored a TKO victory at the end of the second round against Vaso Bakocevic.

Alex Lohore won his Bellator debut earlier this year with a submission victory against Ultimate Fighter alum Colin Fletcher at Bellator 173. He enters Bellator 179 on a seven fight winning streak and he has won back to back fights by submission.

D.J. Griffin (0-0) vs. Kevin Ferguson Jr. (0-1)
After having 4 amateur fights (2-2), D.J. Griffin will make his professional debut against “Baby Slice” at Bellator 179. Both of his amateur wins came by stoppage and he’s coming off a TKO win in August against Justin Gentemann.

After losing his professional debut last year at Bellator 165, Kevin Ferguson Jr. returns to competition at Bellator 179. Prior to his pro debut, he won his amateur debut in early 2016 by knockout.

The complete Bellator 179: Daley vs. MacDonald fight card is below.