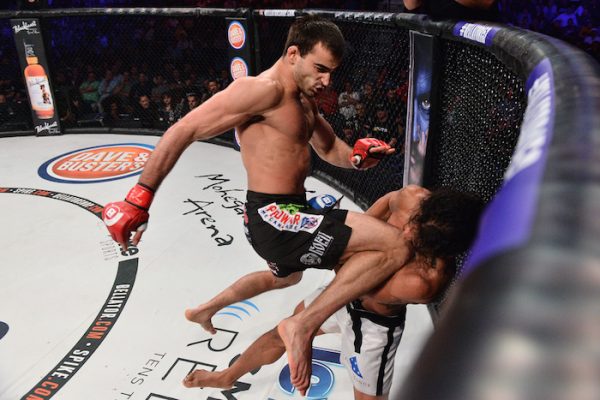 Bellator 182 takes place tonight at Turning Stone Casino and Resort in Verona, New York and will be headlined by a catchweight bout of 175 pounds as former Bellator welterweight champion Andrey Koreshkov returns for the first time since losing his title when he meets Chidi Njokuani.

In the co-main event of the main card on Spike, Fernando Gonzalez will look to make his case for a future title shot in the Bellator welterweight division as he will meet Brennan Ward in a catchweight bout of 180 pounds.

Now let’s take a closer look at the four fights that will take place on the main card of Bellator 182.

Andrey Koreshkov (19-2) vs. Chidi Njokuani (17-4, 1NC)
Bellator 182 will mark the first fight for Andrey Koreshkov in 9 months and this will be his 14th fight to take place in the Bellator cage. In his last fight, he lost the Bellator welterweight title against Douglas Lima in a rematch and the defeat snapped a six fight winning streak.

Chidi Njokuani was signed by Bellator in 2015 and enters this fight on a 9 fight unbeaten streak. He has gone 4-0 in Bellator and is coming off a decision win in January against Melvin Guillard.

Fernando Gonzalez (26-14) vs. Brennan Ward (14-5)
Fernando Gonzalez enters Bellator 182 following a decision win in March against Brandon Girtz and has gone 6-1 in Bellator. Four of his six wins in the promotion have come by decision and his last stoppage victory came in 2015 against Curtis Millender.

Brennan Ward will be looking to bounce back from a defeat at the beginning of the year against Paul Daley and will be seeking his 10th win in Bellator. He has alternated wins and losses in his last four fights and has only made it to the 3rd Round once in his career.

Veta Arteaga (3-1) vs. Bruna Ellen (3-1)
Veta Arteaga will be looking for her 3rd win in Bellator tonight when she meets Bruna Ellen in a flyweight bout. She’s coming off a stoppage victory against Brooke Mayo at Bellator 172 in February and that marked her first career victory by stoppage.

Just like Arteaga, Bruna Ellen enters this fight following a victory after a defeat as he scored a decision win against Carmella James at Bellator 171 at the beginning of this year. That marked her 2nd fight in Bellator and 2 of her 3 victories have come by decision.

A.J. McKee (8-0) vs. Blair Tugman (10-6)
All of A.J. McKee’s fights have come in Bellator and this will be his 3rd fight in 2017. He’s coming off a stoppage victory against Dominic Mazzotta at Bellator 178 and he has only gone to the decision twice in his career.

Blair Tugman enters this matchup with 3 straight wins in Bellator and this will be his first television fight for Bellator. He’s coming off a submission win against Tom English at Bellator 178 in April and is 5-1 in his last 6 fights.

The complete Bellator 182: Koreshkov vs. Njokuani fight card is below.