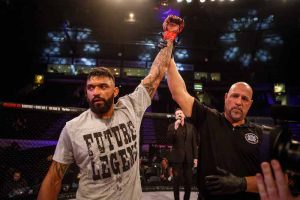 On the Valentine Day edition of “The MMA Report Podcast,” Jason Floyd and Daniel Galvan discuss what’s going on in the mixed martial arts community and Jason has interviews with Liam McGeary, Ana Julaton, and Joby Sanchez.

At the beginning of the podcast, they take a look back at what happened this past weekend in Australia at UFC 221. From Yoel Romero’s knockout victory against Luke Rockhold to the tweet sent out by Curtis Blaydes about his decision victory over Mark Hunt, Jason and Daniel discuss multiple aspects about this UFC fight card.

Following their discussion on UFC 221, the guys look ahead to this weekend’s Bellator 194 and UFC Fight Night 126. While previewing Bellator 194, you will hear Jason’s recent conversations with Liam McGeary and Ana Julaton about their fights on Friday at Bellator 194. McGeary (47:00 previews his matchup against Vadim Nemkov and Julaton (1:00:55) talks about her fight against Heather Hardy. After discussing the Bellator event, they preview Sunday’s UFC Fight Night 126 and you will hear Jason’s interview with Joby Sanchez (1:44:49), who previews his matchup on the preliminary card against Roberto Sanchez.

Then in the final portion of this week’s podcast, they look at some of the news and notes in mixed martial arts. Some of the topics they discuss include Uriah Faber remaining in the USADA testing pool, Malki Kawa’s comments on the Luke Thomas Show about Jon Jones, and they answer a listener question about USADA.