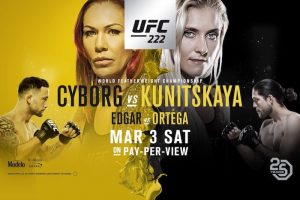 The third UFC pay-per-view of 2018 will take place tonight in Las Vegas as UFC 222 will come from the T-Mobile Arena and will be headlined by a title fight as Cris “Cyborg” Justino will defend the UFC women’s featherweight title against Yana Kunitskaya.

Now if you listened to my podcast this week or follow me on Twitter, you have heard or seen me tweet about this fight card. This is not one of those UFC pay-per-views that is a no question, you are going to buy it. On Friday, I asked my followers on Twitter if they planned to purchased tonight’s pay-per-view and I got a bigger response than I thought I would. Some of the responses I received are below.

No. You can’t plug a no name, with no accomplishments (like winning #1 contender fight), in a lower weight class and expect people to pay FULL PRICE for that. PPV needs to offer more than a title fight.

Leaning towards paying the $10 cover charge to watch at local bar.

Yes, great card in my opinion and the main event is a little weak but still a solid card and the most interesting fight on the card is Edger vs Ortega. Plus the sugar show.

As much as I love Edgar vs Ortega, the normal PPV price for this card is offensive.

Good fights on the card I’m interested in but no, had Max/Edgar been the main event with Cyborg co main with the rest of the card I would have def bought it but Cyborg in this kind of main event isnt worth it to me.

I will be. Some people don’t think much of the main event but as a hardcore MMA fan, I think the card as a whole is going to be a great night of fights. #UFC222

I’ve always been a, “You can’t judge the fights ‘til they are over” type of guy.

If I wasn’t working, I would absolutely buy the PPV.
Legendary Frankie Edgar.
UFC Debut of Dern.
Rising star O’Malley
Retirement of Pyle.
One of the longest UFC vets Arlovski.

Yeap. I am paying $60 to watch a broadcast for the company I work for.

No, I’ll only buy a PPV if it has at least 3 good fights.
And honestly the only fights tomorrow night i’m interested in are @criscyborg @UFC@BronzeBomber @ShowtimeBoxing

As you see with those tweets, the response was mixed. I ended up receiving over 50 responses on whether or not people plan to buy the pay-per-view. Now this article is not a piece that is why or why not you should buy tonight’s pay-per-view. For me, it’s a tough sell as a premium product with a price point of $65. I know the MMA media loves to write articles, “X reason to watch,” but I would be interested in why that writer feels this card is worth $65.

As of the writing of this article, I am on the fence on whether or not I will purchase this event. Since I am a little under the weather right now, I will not be heading out to a bar to watch this, but this is one of those fight cards that is a prime reason to go to a bar instead of ordering it for $65.

Now why would I pay $65 for this pay-per-view? Honestly, it would be for Frankie Edgar vs. Brian Ortega. This is my main event of the fight card and the women’s featherweight title fight does not interest me since I believe it will be a showcase for Cyborg. When it comes to the rest of the main card, Sean O’Malley vs. Andre Soukhamthath is interesting to me. I have been following how the UFC has promoted this fight and it’s all about O’Malley, which is totally understandable. I have known Andre for several years and no one should be surprised if he ends up with a win tonight.

While I am not totally jazzed up for the main card, entirely it due to being behind a pay wall, I am all-in on the prelims. Between the UFC Fight Pass and FS1 prelims, there are seven fights and I am interested to see six of the seven matchups. The top three prelims for me on this card are John Dodson vs. Pedro Munhoz, Bryan Caraway vs. Cody Stamann, and Ashley Yoder vs. Mackenzie Dern. Along with those fights, I am interested to see how Adam Milstead looks as a light heavyweight, Alexander Hernandez stepping up on one week’s notice to take on Beneil Dariush, and what does Mike Pyle look like in his final fight.

When it comes to buying the pay-per-view, that’s a decision you have to make. But as I always say on my podcast, the best way to tell the UFC you are not happy about a pay-per-view card is by not purchasing the pay-per-view. As someone who loves combat sports, I want to buy the pay-per-view to support the fighters, but it’s just a tough sell and maybe it’s just best to wait a month and spend my money on Tony Ferguson vs. Khabib Nurmagomedov.