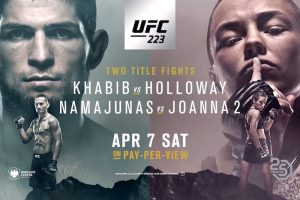 This week on The MMA Report Podcast, Jason and Daniel preview Saturday’s UFC 223: Khabib Nurmagomedov vs. Max Holloway and Jason has interviews with Julien Leblanc, Peter Barrett, and Danny Ramirez.

Now it was just a couple of days ago that UFC President Dana White announced that Tony Ferguson was out of Saturday’s UFC 223 main event and that featherweight champion was stepping up on six days notice to face Nurmagomedov for the UFC lightweight title. Jason and Daniel discuss the change in the main event, can Holloway make history, and preview the other four fights that will be on Saturday’s pay-per-view fight card.

After previewing UFC 223 and telling you their picks for the card, Jason let’s you hear his conversation with undefeated Canadian middleweight prospect Julien LeBlanc (45:48), who will be fighting for the Elite 1 MMA 185 pound title on Saturday night when he takes on fellow undefeated prospect Christien Savoie. Following the conversation with LeBlanc, the guys preview Friday’s Bellator 196 and discuss some MMA news.