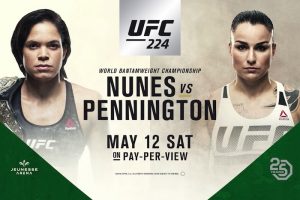 UFC 224 will take place tonight from the Jeunesse Arena in Rio de Janeiro, Brazil and will be headlined by a title fight as Amanda Nunes defends the UFC women’s bantamweight title in her home country as she will be challenged by Raquel Pennington.

Nunes is a massive betting favorite (-900) tonight and she is the fighter on the card that I am most confident in picking to win. I do not see this going all 25 minutes, but that is likely the path for Pennington to walk out of the Jeunesse Arena as the new UFC women’s bantamweight champion. Pennington likely needs to make this a fight in the clinch and try to wear down Nunes over 25 minutes.

However, I just do not see that happening and I expect to see Nunes retain her title with a stoppage victory sometime in the first 15 minutes of the fight. And if Nunes does retain her title, we should expect the UFC to attempt to book a fight between Nunes and current UFC women’s featherweight champion Cris Cyborg.

Now in most cases, the main event of a UFC fight card is the fight that I am most interested to see play out. But that is not the case with UFC 224 as Ronaldo “Jacare” Souza vs. Kelvin Gastelum is my number one fight on UFC 224. In fact, it’s my number one fight on the UFC and Bellator fight cards. Jacare vs. Gastelum is the fight that is getting me to purchase this pay-per-view and I like the underdog, Gastelum to walk away with the victory.

The key to victory for Gastelum is to stay on the feet. If Jacare is able to get the fight to the mat, Gastelum will be in trouble. But I do think that Gastelum can keep this fight on the feet and I like him to win by stoppage within the first 10 minutes of the fight and that should line him up to face the winner of next month’s middleweight title fight as Robert Whittaker defends the middleweight title against Yoel Romero in a rematch.