UFC Liverpool: Thompson vs. Till Preview and Pre-Fight Stats 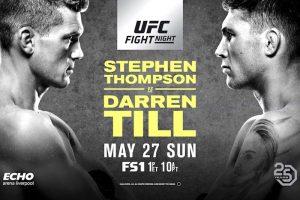 The matchup between Thompson and Till is a catchweight bout due to Till missing weight yesterday by 3.5 pounds and the fighters came to an agreement on conditions for this fight taking place. Along with a financial penalty (30% of Till’s purse), Till has to weight in today at the venue and can not weight more than 188 pounds. From a fight fans perspective, let’s hope that Till is 188 pounds or less and we get to see these guys square off today inside the octagon.

When it comes to the fight, Till missing weight does not effect my pick for the fight. My pick for this matchup has always been Thompson as I just feel he’s at a different level than Till. While Till is coming off a spectacular knockout against Donald Cerrone, this is a fairly big step up in competition for Till. I expect Thompson to stay on the outside, he will eventually frustrate Till, and Thompson will get a stoppage victory sometime after the third round.

Before the main event of UFC Fight Night 130, we will have ten fights and there’s not a lot that sticks out to me. Unfortunately for the UFC, Gunnar Nelson was forced to pull out of this event a couple of weeks ago and Neil Magny is now facing UFC newcomer Craig White. Magny vs. Nelson was an interesting matchup for me and stepping up on short notice to make your UFC debut against a veteran like Magny is a tough task. Magny is the biggest betting favorite on the card (-650) and I expect to see him walk out of the Echo Arena with a convincing victory.