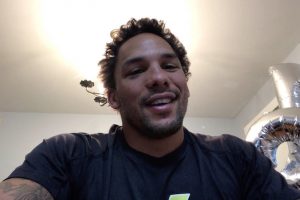 With this being the Thanksgiving Eve edition of the podcast, Jason and Daniel kickoff the podcast by telling you what they are thankful for in MMA. Then they get into Saturday’s Liddell vs. Ortiz III pay-per-view. They discuss the price point for the pay-per-view, FITE TV doing a Black Friday special for the fight, and some of the comments that came out of Tuesday’s press conference.

Up next is UFC Argentina, which took place this past weekend. They discuss the dominating victory by Santiago Ponzinibbio in the main event, the biggest surprise of the night and their biggest takeaway from the prelims. After discussing UFC Argentina, they play recent comments made by UFC President Dana White about Daniel Cormier and discuss a social media post by Stipe Miocic.

Then it’s on to the interview portion of the show as you will hear Jason’s conversations with Eryk Anders, Martin Day, Kevin Syler and Dom Meriweather. Anders previews his matchup at UFC 231 against Elias Theodorou, Day talks about his fight on Saturday at UFC Fight Night 141 against Pingyuan Liu, Syler previews his fight in the co-main event of Combate Bolivia on Saturday against Marcelo Bustos and Meriweather tells you about his fight next week against Cliff White at Alaska FC 143.

Following the interviews, Jason and Daniel take a look back at what happened at Bellator 209. They give their thoughts on Patricio Pitbull vs. Emmanuel Sanchez, Vadim Nemkov upsetting Phil Davis and comments Bellator President Scott Coker made after the fight card. And in the final topic of this week’s podcast, they preview Saturday’s UFC Beijing.