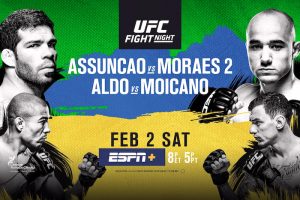 The second UFC event of 2019 took place on Saturday night in Brazil and was headlined by Marlon Moraes making his claim for a shot at bantamweight champion T.J. Dillashaw with a first round submission victory against Raphael Assuncao.

In the co-main event of the fight card, former UFC featherweight champion Jose Aldo scored his second straight victory as he defeated Renato Moicano by TKO in the second round and the main card also saw stoppage victories by Demian Maia, Charles Oliveira and Johnny Walker.

The complete results for UFC Fortaleza are below.