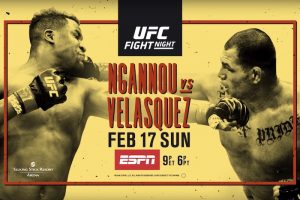 Along with the heavyweight main event, the main card on ESPN will have five other bouts: Paul Felder vs. James Vick, Cynthia Calvillo vs. Cortney Casey, Alex Caceres vs. Kron Gracie, Bryan Barberena vs. Vicente Luque and Andre Fili vs. Myles Jury.