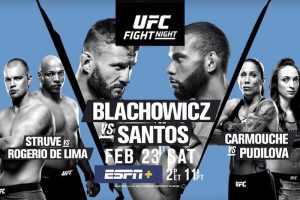 UFC on ESPN+ 3 takes place today from the O2 Arena in Prague, Czech Republic and will be headlined by a key light heavyweight bout as Jan Blachowicz looks for his fifth straight victory when he takes on dangerous striker Thiago Santos.

Along with the light heavyweight main event, the main card on ESPN+ will have five other bouts: Marcos Rogerio de Lima vs. Stefan Struve, Michal Oleksiejczuk vs. Gian Villante, Liz Carmouche vs. Lucie Pudilova. John Dodson vs. Petr Yan and Magomed Ankalaev vs. Klidson Farias.