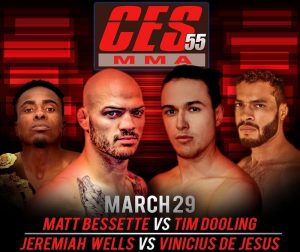 Along with Vinicius de Jesus winning the welterweight title, the card featured Tony Gravely retaining the CES MMA bantamweight title with a submission in the second round against Darren Mima and UFC/Bellator vet Matt Bessette scored a decision victory against Tim Dooling.

The complete CES MMA: Wells vs. de Jesus results and fight video highlights are below.

The Contender Series grad @ManglerUFC lands his second knockdown of the first round! #CES55 #UFCFIGHTPASS pic.twitter.com/aCpa7NfICp

The @UFC vet @EricSpicely earns the first clean KO of his career and makes it two @CESMMA stoppages in a row! #CES55 @tristargym pic.twitter.com/5wbceXuqgt