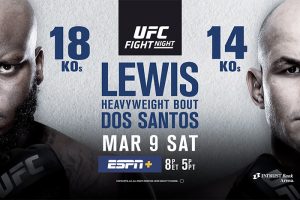 UFC on ESPN+ 4 takes place tonight from the Intrust Bank Arena in Wichita, Kansas and will be headlined by matchup of top ten heavyweights as Derrick Lewis looks to bounce back from his defeat in November against heavyweight champion Daniel Cormier when he takes on former UFC heavyweight champion Junior dos Santos.

Along with the title fights, the main card on ESPN+ will have five other bouts: Elizeu dos Santos vs. Curtis Millender, Tim Means vs. Niko Price, Blagoy Ivanov vs. Ben Rothwell and Beneil Dariush vs. Drew Dober and Tim Boetsch vs. Omari Akhmedov.