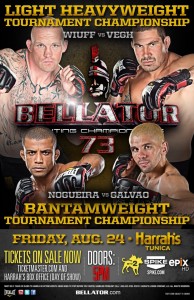 The main event was the finals of the Summer Series light heavyweight tournament as Atilla Vegh only needed 25 seconds to knockout Travis Wiuff and earn a title shot against Christian M’Pumbu.

At the start of the fight, Wiuff came straight at Vegh and attempted to close the distance to set up a takedown. Vegh was able to drop Wiuff with a right hand and knocked out the MMA veteran.

Vegh will now receive a title shot against M’Pumbu and Bellator officials have not announced when the title fight will happen.

The co-main event was also a tournament final as Marcos Galvao defeated Luis Nogueira by TKO in the second round to claim the season six bantamweight tournament. Galvao was able to out strike his opponent and rocked him in the second round, which led to the end of the fight.

Galvao landed several strikes that had his opponent on his heels and ended up getting the fight to the ground. Once on the ground, Galvao was about to get in the mount and finish the fight with punches and elbows.

He will now receive a title shot against Eduardo Dantas and that title fight is expected to take place on November 2nd at Bellator 79.

The complete results of Bellator 73 are below: