Phil Davis and Wagner Prado initially met at UFC on FOX 4 earlier this month and the fight was ended earlier in the first round by an illegal eye poke by Davis. 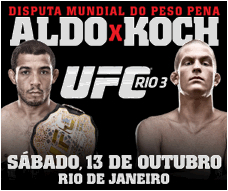 The bout was declared a no decision since the cage side doctor called the fight after looking at the eye of Prado.

The bout was moved to this card after the card lost the middleweight bout between Vitor Belfort and Alan Belcher was scratched. Belfort was moved to the UFC 152 main event against Jon Jones and Belcher has a spinal fracture.

UFC 153 takes place from the HSBC Arena in Rio de Janeiro, Brazil and the current fight card is below: